A new pilot program launched by the U.S. Department of Transportation will permit 18-20 year old drivers with the military equivalent of a CDL to drive trucks across state lines for civilian interstate commerce. The program was announced July 3, 2018 in Omaha by U.S. Secretary of Transportation Elaine Chao, Nebraska U.S. Senator Deb Fischer and Congressman Don Bacon.

Crete Carrier President and COO Tim Aschoff attended the meeting and came away encouraged about the potential for the program to help younger members of the military start a career in trucking.

The program will primarily apply to young people in the National Guard or military reserves. While details remain to be worked out, members of those forces could pursue training to become a military truck driver and—when not on active duty—use those skills to haul freight down the nation’s highways.

“Say for instance, you have someone entering the working world who wants to join the guard or reserve, but also wants to learn an occupation that could lead to a civilian career. We know truck driving can be one of those occupations,” said Aschoff.

Currently drivers must be 21 to cross state lines for interstate commerce. Aschoff says concerns over safety among the 18-20 year old group are understandable—and the motivation behind the pilot program. The program will compare younger drivers with military experience to a control group of 21-26 year old drivers. Aschoff says participating carriers, like Crete Carrier, will provide additional training and closely monitor the drivers in the program.

“We want to know the level of safety and responsibility with those 18-20 year old drivers compared to the 21-26 year olds,” said Aschoff. “They’ll get out on the highways with their CDL, proper training and close monitoring so data can be gathered on how they perform.”

Active duty veterans under 21 will also be eligible for the pilot program as they transition to civilian life. Aschoff believes the program could help the trucking industry and the military fill a need for more drivers.

“One of the things I learned at the meeting is that guard and reserve units in both the Army and Air Force provide most of the logistics services to the active military. It’s enlightening to me that this is something that can benefit both our U.S. Military and the trucking industry,” said Aschoff. “By having a path to a good paying job in the private sector, new guard or reserve members may be encouraged to pursue truck driving in the military.”

No specific date is set for the start of the pilot program. The next step is a public comment period to the Federal Motor Carrier Safety Administration followed by the Agency’s responses. 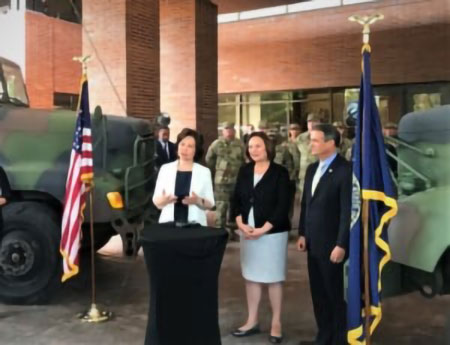