We’re fortunate to have a lot of long-time drivers at Crete Carrier, Shaffer Trucking and Hunt Transportation. Careers stretching over multiple decades are relatively common, drivers who find their professional home with the Crete family and retire here.

Alice Glover is one of those drivers. She recently retired and I was fortunate to have the opportunity to talk with her a bit about her life as a driver.

The first company she spoke with at her school in South Carolina “…wouldn’t give me a chance…made me feel like it was because I was a female.”

But she soon found a job with a company making cross-country runs every week. She liked it, but as she gained experience with other companies, she looked for the next step, Crete Carrier.

“Coming into Crete was hard.”

Alice says that when she and other drivers spoke about Crete, they looked at it as a “retirement company” because there were “so many older people”. She joined Crete in 1997. And it became her retirement company after more than 23 years behind the wheel. She didn’t want to leave because Crete was the “best company she ever worked for.”

For Alice, the foundation of a successful career was clear communication with the people she worked with. “When I first started…I let them know, ‘Don’t lie to me and I won’t lie to you.’” She says she never had a problem getting home “…because I called and let them know exactly” when she needed to be home. “You have to let the asset managers know what you want. They can’t give you what you want all the time, but they try.”

And she says it’s important to give people a chance. She shared a story about someone she thought “looked mean”. Eventually “I met the person. I actually talked to him. A little teddy bear.”

Over the years Alice made a lot of friends at Crete terminals throughout the country. She spoke of a friend in Lincoln who she had just visited with. “She came over yesterday afternoon and got me. I had a great time with her. Friends like her that when I get to a town, I know that person and it’s great to be with someone I haven’t seen for a while.” She says she’ll miss seeing those folks. And wonders how she’ll like retirement. But she knows it’s time to be home with her mother. 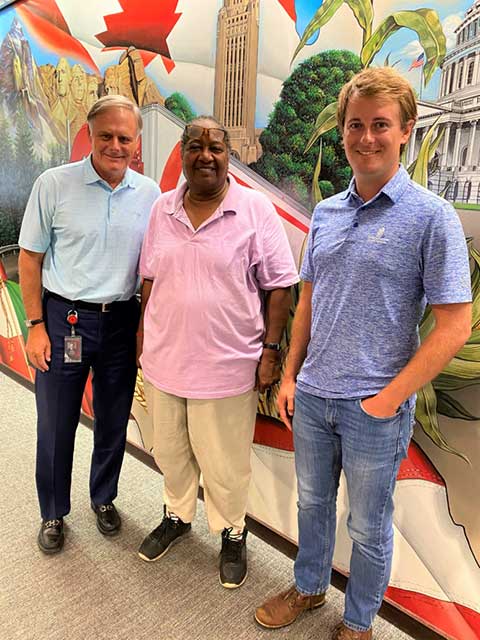 Funny thing is Alice never intended to be an over the road driver. She entered a job training program expecting to learn how to drive “a little truck.” When she saw the tractor trailer at the school she asked, “You want me to drive that?” But she didn’t back away or change course. She completed the training and finished first in her class. And everyone who knows and worked with Alice is glad she did.

Watch more of Alice’s story on our YouTube channel.