No matter where you work within our company, you’ll hear coworkers talk about Crete, Shaffer, and Hunt being “family”. Of course, in most cases, we don’t take that literally. It’s more of a feeling of knowing others have your back. That we truly care about each other. But recently I heard a “small world” story about some family connections that go a little deeper.

Memphis Fleet Manager Bo Brigman shared that he had been talking with Crete owner operator Scott Kleman and discovered they were once neighbors. Both grew up on the same street in Horn Lake, Mississippi.
Bo said their conversation then took another surprise turn. Scott’s father Michael Kleman was an owner operator with Crete Carrier in the 1970s! He shared a photo of his dad’s 1969 GMC cabover sitting on the street where they lived in Horn Lake.

I had to call Scott to learn “the rest of the story”.

Scott’s a few years older than Bo, and neither remembered the other. They know a lot of the same people—and Bo’s cousin even babysat Scott and his brothers. He said all the neighborhood kids “ran together” so he and Bo may have known each other.

Scott started his trucking career riding with his dad at age 1. He learned how to drive a truck at an early age. But his professional driving career didn’t start right away. He joined the Army after high school, serving in the 82nd Airborne. When he finished his military career he worked as a millwright for several years. Then the call of the open road beckoned in 2000.

A series of serious health problems eventually led him to Crete. He was working for another company in 2008 when an accident (another driver was behind the wheel) caused serious injuries. He returned to driving after several surgeries but suffered a severe heart attack in April 2011. He was only 39.

Scott says he was in a coma for 11 days. Doctors later told him he had a two percent chance of survival. He beat the odds but needed a heart transplant. In August 2011 he received a new heart. He was eventually cleared to drive and decided to make a fresh start with a new company.

After doing some research he chose Crete Carrier because “it had the best pay and benefits”. He hasn’t looked back. In March of 2017, he joined the owner operator fleet, purchasing a 2014 International, which he paid off in about a year. He’s doing well, with about 16,000 miles in July. For his career—including his previous employers—he’s around 3 million miles.

Despite the ups and downs of his life, it seems Scott was destined to be a trucker—his dad drove for more than 30 years. And if the old photo and a chance conversation with a childhood neighbor are any indication—he was destined to drive for Crete too. 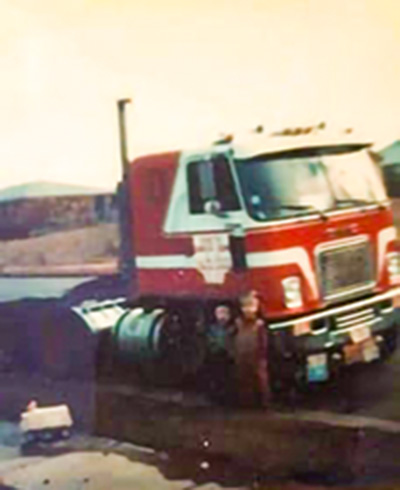